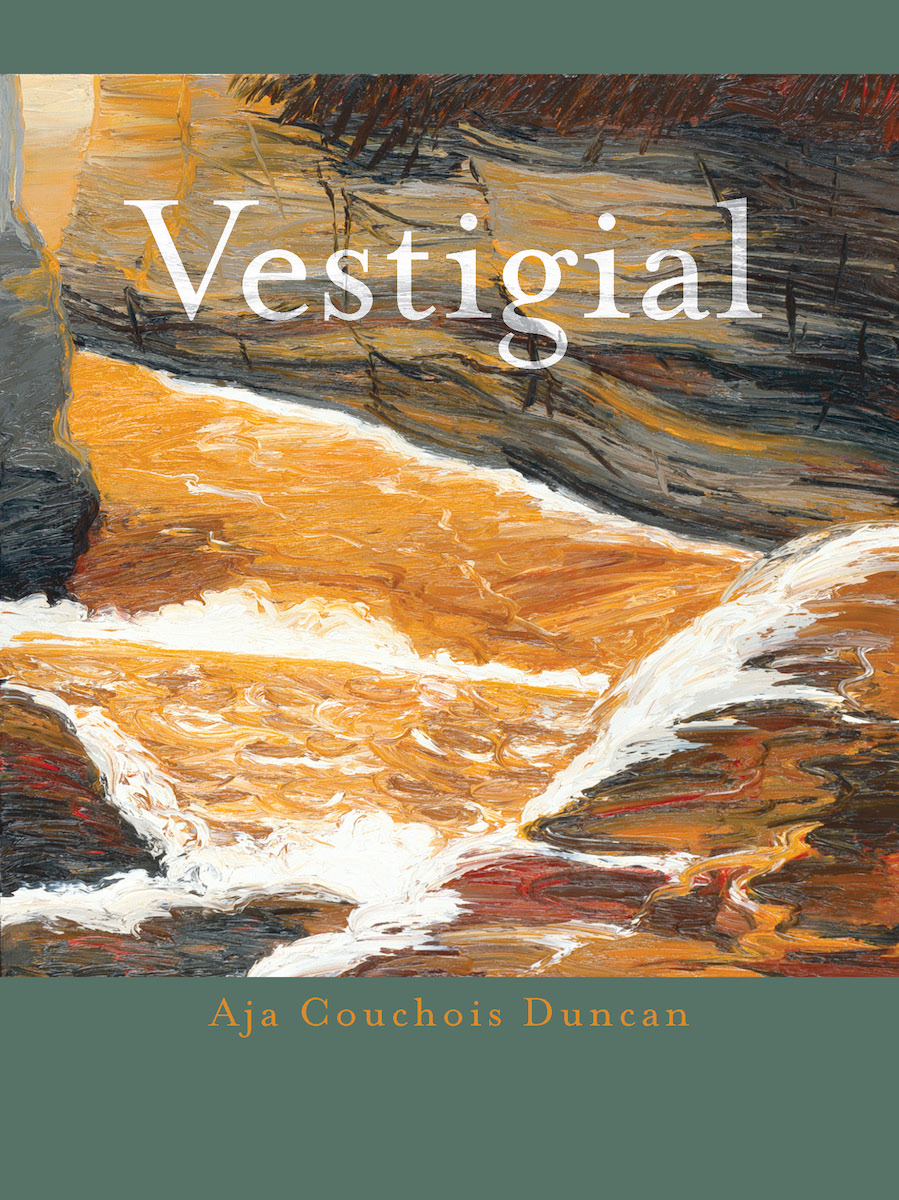 VESTIGIAL is a flesh epic braiding time and bodies. Poet and librettist Aja Couchois Duncan writes, “The story of evolution is a love story” and, here, the land, water, and air function as organs in her lovers’ mercurial anatomies. Duncan renders her characters in a language binding them to a natural world, such that science and myth become twinned. The result is a poetry of precise resistance to worldviews that insist on cleaving the human from the environment. At scales simultaneously intimate and monumental, the poet resists the figurative to orchestrate eros, violence, and corporeal transformation. “In the epigenetic drift, she is alternating between ancestry and an impossible future tense,” Duncan says of the VESTIGIAL's odaanisan. She could very well be saying that of her own visionary poetics.

It begins millions of years ago with algal mats and bryophytes. Later, when the water recedes, the earth is stitched with gymnosperms, angiosperms, grass fills the open expanse.

It begins the way all beginnings do. Everything is new, unknown, cellular. The sun spills its full splendor across the landscape.

It begins with her opening, almost imperceptibly, toward the light.

The green hawk moth beats its wings, feeds on the nectar of flowers with the prick of its tongue. From a distance, she mistakes it for a hummingbird.

Convergent evolution explains many things. How different species can develop similar features. How their bodies can fit each other perfectly and yet they share neither chromosome nor tongue. How his scent is absorbed by her vomeronasal organ, signaling something to her hypothalamus that she cannot translate into words.

At its southern point, the cordillera is madre, a high plateau laced with river valleys. Each day they travel south from the volcanic peaks to the cordillera’s sloping granite tail. Here, he says, take my hand. She reaches for it, holds it tightly for as long as she can.

Their journey is striated with extinctions. Most species die out within10 million years of their first appearance. Hominids have traveled aki for more than 6 million. With each step, the earth beneath them erodes.

Molting. Whatever comes, she says and means it. She is good at meaning things. Such arrogant gestures to lash together words and make a voyage of them. To travel the cordillera in the most precarious of vessels. To miscalculate the distance. To tear the map in two.

If only the body could be read as geology, as time and accretion. But it is a temporary architecture. At night, despite the battles, she draws her hands along the angles and planes of his freshly hewn masculinity, running her fingers down his southern tip.

Listen, she says, but there is no one beside her.

Listen, replies the wind as it rattles the dead leaves from the trees.

Beneath the yucatan peninsula spreading out into the waters of the gulf of mexico is a scar one hundred and ten miles wide. The chicxulub crater was carved millions of years ago by celestial impact, then covered by sedimentary rock, by limestone and sea water, by mangroves and estuaries, by rainforests and grasslands, by cities and veins of asphalt roads.

Look, he says, appearing suddenly out of the ashes. There, in the cup of his palm, is a thin layer of clay sediment rich in iridium, one of the rarest elements in the earth’s crust, but common to asteroids.

Look, he says, and licks the dust with his tongue.

In the dream that is not a dream, she weaves baskets of wiigwaas and fills them with seeds. When the time comes to plant, the seeds are desiccant, their coats split open. Rubbing them together, she creates enough smoke to fill the basket, to fill up the empty space in her heart.

There are four elements that make up 96% of all living matter: carbon, oxygen, hydrogen, and nitrogen. Fire requires just two.

When the conflagration has scorched all of the land around her, her dreams become smaller. The seeds are gone. She has only a small pile of wiigwaas from which to weave a new land to harvest.

In every family there are genetic pathways, tributaries that guide molecular units of heredity. She hears them calling to her the way dawn calls the sun. She has been asleep so long that their voices have become urgent. They tell her things in a language she does not understand.

Indaanis, my daughter, and then the wind.

When she opens her eyes, the sky is bright, as if she had slept half the day, half of her life.

Indaanis, the ice caps are melting. Watch out for the river. It will flood soon.

During the most recent ice age, the seas dropped and the glaciers rose. Now everything is being reversed. Animals follow the water down the mountains into the valleys. They track rivers across state lines.

One day she finds a black bear in her front yard. Makwa, she says, you are hundreds of miles from home. Slightly shorter than she is, it outweighs her by at least thirty pounds.

When night falls, the bear is still there in the yard, marking the tree with claws and teeth. She brings it a basket of berries and sits on the porch watching through the darkness as the bear devours them. When the bear is done, it climbs the tree and wraps its thick body around the sturdiest branch.

She places a blanket and pillow in the boat and makes a bed of it. She can hear the bear snoring, a husky vibration that lulls her to sleep.