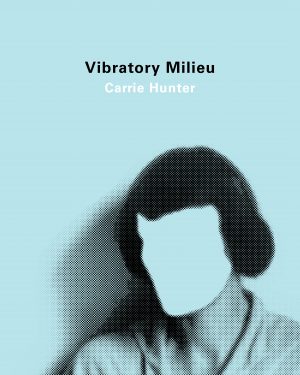 Like the eponymous teen heroine of strategic reversals, Carrie White, Carrie Hunter wields awesome telekinetic powers. Collaged quotations and phrases hover on the page, spotlighting the objects of our desire, fury and incredulity. We find ourselves to be somewhere within 'boundaryless metamorphosis’s apparent borders', making 'decision(s) within aporia', a tensile and refractive echo chamber of mega consequence. With heightened awareness of the stimulations and fabrications at hand we become emboldened to bring down the house (capitalism, racial, gendered and ecological violence, etc.), an imbricated architecture, every part, every function accumulative and inextricably linked. In Vibratory Milieu, feminist provocation tackles the garish and overarching humiliating features of the omnipresent succubus that wields so many guises. 'If true consciousness lies below the conscious level', ease into the hypnotic genius of Carrie Hunter’s representation of encounter. This book is the best possible psychic release. —Brenda Iijima

H.D. in my dream last night asking: do you have any #5’s? Whether they are arks or orbs, I am one among many. An exceptionally affectionate Arabian horse. Poems that won’t stay in their boundaries, but float here and there and the poet’s job is to wander around collecting them. “I didn’t want to hide behind an attempt at ventriloquism.”

DECISION WITHIN APORIA. The freeway closed due to a robbery-stabbing and the guy escaping on foot. I don’t want to get my feet wet. Nearly every day words disappear. “If Andrew gets up, we’ll all get up, it’ll be anarchy.”

The blue ticket counter. Privacy is not a certainty. The aesthetics of the bus. Dreamt we were impersonating either oranges or orange juice or something orange, and a bunch of us were crammed into a human-sized crate.

The similarity between “leaf” and the “hood” of the snake in Sindi.

It’s a feedback loop & nobody knows where the loop stops. Can’t I just be afraid without a definite object? This is in a hospital. The new “web” that is just coffee dates. I COLLECT SITUATIONS. How gender annuls the universal. There is someone pounding on a door so hard I wake up, and no one is pounding on a door. “Such a difference between what you dream about and what’s really there.”

“We have to drink in silence.” The sound of the faucet turning off. I tell them that I do not sleep near the windows. “No one’s ever stilled his hunger with manners, my dear.” The dream is in slow motion, danger-style, and all the sudden there is a cheetah there.

The anti-poetic voice as a defense.

Stranded in the moment passing between us. A basement room that you step down into and is in the back of the building. “And I’d say to God do your best and crush us.” Space touches itself and replicates itself and becomes. I had put my heart outside so I’d have a place to sit.

Inverted word order/inverse floater. My computer just used an adverb. Clock ticking. Covered up in transparencies. Dying all the time, everyday we’re dying, but one day the process will end. WE DO NOT COOPERATE WITH BELIEF. He’s running out of foreclosed properties. The poet’s mouth open between lines, performing her reading while staring at the audience intently in a sort of sensual demand of the audience. “Girls have energy, vitality.” The ceiling was peeling back in this one room with a washer and dryer, and then I saw the person above lift up the ceiling, from their floor, and throw in some clothes into the washer from above. I already have a bowl of olives, every table has olives.