To Think, Fight, and Fuck to

I present this playlist as a playlist to think, fight and fuck to. When I think of playlists there must be a well rounded approach. It must confront on all fronts. So that it make you a better lover, person and one that lives better amongst others. This helps to make one ready for the night of present and the dawn of the future. From many of the texts I share a personal connection to. Cecily is the first person to welcome me into her space in Vancouver and I always feels warmth and gratitude towards her because of this. Especially since I met her after a heartbroken bender of mine. John is always on my mind and makes the same tune as “Something about John Coltrane” but this “John” is my John that I picked up. There’s always something about that feels like the tickle of hair growing out of my scalp. I couldn’t be more in love. Reek is my forever comrade in arms. Probably the most important artist and militant of our generation because of how Reek fights for their friends. Raven is also the most important remnant of the Black anarchist tradition and has the quiet affect of a monk. The two former people I mentioned are leos, and the third one is too, Manuel. Manuel is the most sincere person I’ve met in awhile in the poetry world. I began to read their book “transtrender” and there’s been no turning back. Zaina, the last militant poet in the states. She puts so much passion into her relationships with organizing as she does poetry. Other texts, the only relationship I have to them is that they taught me something. So, I am sharing. -Jasmine

Looking back, I can feel the lost optimism. There was a moment when I believed that this was it, that the time had finally come, and that we were part of a global movement to challenge and dismantle these violent structures. There were intense and active rebellions across the world. And although we were not all on the same wave, we were inspired by each other and that made us a danger. We were unaware that we had been set up like a row of dominoes, falling one by one after another. Because as we taught each other how to resist, the states we were fighting also learned from each other and coordinated our repression.

Despair seems like an expected result after experiencing and witnessing repression. It’s a part of the cycle that insurrectionary social movements seem to follow: An uprising happens, inspiring the spread of unrest; then there is the cooptation of energy by liberal political parties and nonprofit organizations; then there’s a crackdown by the state, including severe prosecution and imprisonment; then a lull, where it still feels possible that things could reignite. When they don’t, you reach the final stage of the cycle: Despair.
First appeared in The New Inquiry (Spring, 2018). Reprinted with permission of the author.

vibrators are the sweetest lovers, anyways.

I don’t want to date anyone who doesn’t understand alone time.

i dream of being penetrated on beaches in daylight by dark clouds as we cry together.

“what do you need”

“how can i support you”

i don’t know if sharing my body ever feels like sharing.

i don’t know if the imprints of rope will ever leave wrists.

i took a long shit in the bathroom so i could avoid everyone.

my cats think poorly of me

but the babies i care for, scream when I leave them

some days that’s the only validity i need.
First appeared in Queen Mob's Teahouse (Winter 2016). Reprinted with permission of the author.

Asking ourselves between each other: what do we know about that, what do we want from that?

Insomnia of armed struggle, nub and suck and sickness rub feeling down
numb’s unfinished senses, sentences, graces
wavering hands grab water glasses at night my garble granite
my glowing worms shrinking in the dark
I grant them that; and do I give it to myself too?
do I give myself too? do I tune my intuition?
can I even listen to my listening, pissed off hisses
and sometimes blissed amid confusions and missed calls
kissing between agitations

Otiosely making noises around the home gloaming
in low german stomach, sleeping as gloating
I don’t know the words but I can hum, not reading
but hymning like them like hurt like them along

Bent breathing as huddled berries, spherical anxieties taken blue by blue
picking skin and casting it closer, put yourself fully in that store and support
treat me as I lay clawing and camouflaging in aloe: proximal nearest, our dear

Rushing weak ropes of rain, holy wafers restless down and tongue
soaked a nation cannot seep like us, steeped in everyday teas

The metal grooves caress us back into material music of which the word social can’t even describe
our diatribes, dialect ticks and trainings for a metamorphosis into morning people
caught back up in past midnight cough

If everything can be deleted, will you save some for me?

All animals linked in their alliance with knowing what they need, and the needs vary
in this abandoned green world, never a pleasure, always a pleasure
Reprinted with permission of the author.

from From the Poplars

subjects of capture
property in the strictest sense

bound in a given moment
called to ground

unitary in the midst scattered

breathing
this next while a kind of evolution

stratifying dialects
from a strict sense of words

soluble paper ever sad
phonetic social generations and forth

light comes up over the southeast bridges

that a place told you it was      bleeding into the snow

pages to an opposite shore

to earth beneath here

so sanctuary monoglot accent
island passed back into non-standard

sway and song put to order; to archive under English cloak

romancing words      composed upon a bridge
in the smokeless air

routes you give in strings and I take as ligaments


called to the surface revolution a minimal surface

the most minimal surface other than the plane

a bloom
a smile curved up into sepals awn-like petals

wanted an explanation, wondered, why

the echo of form without the wisdom,

why the bent wit without the timing.

Wondered, as I have, how a man, bare

upon the bed may rise as if in praise

but fail to be grateful for the gift at hand.

O schlong of longing, as present

but ultimately unknowable as your

maker, I would worship at the fount

if I had more faith, if I knew your

weeping eye was on me alone.
Continue reading on www.poetryfoundation.org

I’ve been to protests In Istanbul and Greece. I’ve seen windows smashed, graffiti drawn, Molotovs prepared, and things set alight. Still, the situations where lighter skinned people were filling the photographs: protests. When darker skinned people are involved? Riots. The decision to call one riots and the other protests has nothing to do with the amount of violence in the demonstrations. Violence is a realistic factor, and sometimes, a tactic, in all of these protests. Resisting is never peaceful. If the State fears you, it will crack down on you violently, despite your kumbaya circle.
First appeared in The New Inquiry (Fall, 2013). Reprinted with permission of the author.

my younger sister always felt like my older sister

apologies are about social control

i apologized to my mom for djing devil music

this feeling is shot entirely with natural light

not that you could erase a colonial gesture 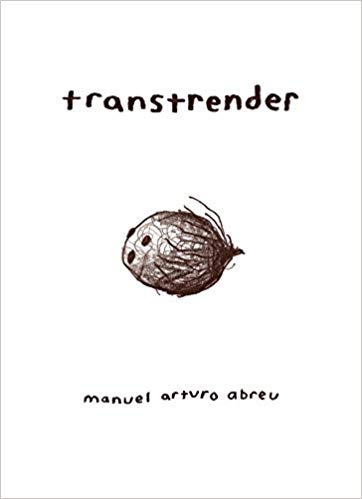 From "transtrender" by manuel arturo abreu (Quimérica Books/Ugly Duckling Presse, 2016). Reprinted with permission of the author.

Apologies to All the People in Yemen


I didn’t know and nobody told me and what
could I do or say, anyway?

They said the war is civil, they call it cold,
bombs rain from an assembled cloud of coalition nations,
they said we have to stop Iran, they said Al-Qaeda, they said ISIS,
most serious journalists cannot assign blame.
Sure, it’s been reported more than 50,000 Yemeni children dead,
a dead child for every hour’s fraction since the war began.
Sure, Yemeni hospitals have been bombed, in 2015,
and 2016, and 2016, and 2018. In war’s heightened fog
mistakes are bound to happen.
Sure, one million people have contracted cholera, the same illness that appears
in 10 cases a year in the U.S. Sure, international agencies have written
famine and crisis in spirals and one report briefly mentions mothers
unable to summon enough milk to fill the mouths of newborns.

In American college they taught me to use it’s complicated,
as a sign of intelligence, anchored against the allure of look.

until no one remembers what you were talking about
to begin with. And aren’t I an Arab too?
No one told me I would have to choose
between all the faces that could be
my own.

I am not an evil person, just busy explaining
why I deserve to be in this lecture hall, in this living room,
at this desk reading an article about Arab children who die,
on a small plot of theft I can lay claim to.

No one taught me some children are called children
and some would be called proxies.

No one told me that Yemen is Gaza is ICE contract is
concentration camp in Florence, Colorado.

Yes, I did know the taxes I paid when buying concealer
to cover the blemishes on my cheek, or on groceries
that kept my belly full, also funded seven thousand and twenty
Paveway bombs. Yes, I voted for the president who authorized
the sale.

But I looked to the streets and they were quiet,
there is so much else to protest, what could I tell people?

And if I could not adequately agitate others to count
the visible ribs of the child dying on the doctor’s table,
to hear the screams of light’s ending     to hold this sound
in a balloon of seething shame, to call this balloon regulation,
a refusal of life assignment as gated chlorine,

is it not better to be quiet? I am no expert, I am nobody public.

But I saw the bones, I see them,
even with nobody else around, a wind unfurls and lingers,
it steams off of windows.

The bones are now blinds and all
of the aged cement between bricks and I am sorry.