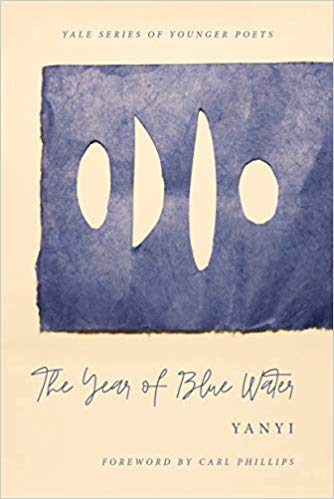 The Year of Blue Water

It’s strange but fulfilling to look through this book again, now published and read since this March. One of the curious strengths of the project and the poems is that they can truly be ordered in many permutations, orders that I have not done before. And even a mild change can create new sensation in the reading. Each permutation could have started a similar but different book. I’ve compiled a small selection, until now only published in the book, around the questions of wanting and having and not having yet, especially as we are made to believe about wealth, accumulated or not, which serves as a conduit for action, inaction, and all kinds of judgments we place on ourselves and other people. Then there’s the imagination—of character, of love, of living—whose abundance is only apparent in practice with it, in liberation. —Yanyi 30 July 2019

I asked for Cheerios a week after my fifth birthday, which was also my last birthday party. I don’t remember what we usually had for breakfast, but it was not that. I wanted Cheerios because it was the most delicious snack I had ever had and I never asked for things from the store. They were expensive; they weren’t off-brands.

We didn’t have bags, so I used cellophane and tape to meticulously wrap a handful of Cheerios into a bag-like structure. Then I walked across the hall to June’s apartment. June was one of my first best friends, or at least that was what I told myself. I’m not sure if she remembers who I am but I remember being embarrassed more than once at her house.

I knocked on June’s door and held the bag of Cheerios in front of my face and said thank you for coming to my party. I don’t remember what she said. When I went home, my face was hot with embarrassment. Had she been confused? Did it dawn on me as I saw her face, whatever it had been, that it was just weird to give people cereal as party favors? Cereal that I only knew about because once, I had had it at June’s house.

Ah, so that’s what had happened. I didn’t know how to have a party. I didn’t know what I could have as party favors, and that it was not okay to lick the sugar off the plate when I was finished with my donut. Thinking back, perhaps I don’t have birthday parties because of the way I was made to feel poor, that I had nothing to give.

When I’m potting the plants, I think about this little life in my apartment. I have not been home to help it grow. When the sun is treading lightly over winter months, it is so nice to talk to Robin over the phone. It is so nice to nail my poster back up, to put new lights along the wall. There are more ways I can be here. There are things I have not done.

Frank O’Hara’s “Morning” is the first poem I consciously memorized. I am writing it in Wei-Ming’s letter and I am rereading it this morning very slowly. Seeing the text, I realize that I have memorized some parts incorrectly. At first, I was not reading it; I was reciting it from that place where rhythms and bodies begin to stay with each other. Reciting quickly because I needed to catch the rhythm as it happened to me, so that I would not lose the music of the poem and therefore the poem. Right now, losing the poem as it exists may not be the worst thing. If I really knew it, I could do it at any speed.

I’m working on being alone today. It’s the new year. I start with drunk dreams and then texts to Diana about carrying our homes with us. I think about who I want to write letters to: Joe, Katherine, Mary. It comforts me to write letters: they remind me that there is someone listening on the other end. Likewise, I have received writing that felt made for me. People who are dead want to talk to me. I’m writing; I invite you to my life.