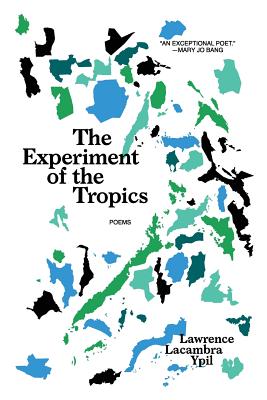 The Experiment of the Tropics

Returning us to an often forgotten part of American history, the colonization of the Philippines from 1900–1946, The Experiment of the Tropics digs into history’s archives and excavates a city, both real and imagined, that is constituted by the shimmer of petal and porch, coral and brass—a river-refrigerator where women catch their reflections on the sheen of magazines and men lean against the walls of old houses and beckon, come here. So, we approach.

The Nature of a City

The nature of a city depends on the direction its people are moving. In the morning, towards. By evening, away. The wealth of a city depends on the density of this movement and its speed. There is conflicting evidence to suggest that the slow pace of traffic moving away from the center of the city at six in the afternoon, past the pharmacy at the corner into the wide industrial roads that cut through the fields of fallow over six small bridges and six thin rivers into the smaller and smaller towns until one gets to a house with the light left on in the kitchen is the best indicator of a city’s development or demise. It takes bringing something into the heart of a city, then back out into its tributaries, to raise the price of one’s possessions. This principle applies to one’s hopes and desires as it does to chickens and vegetables. There is hardly any evidence left, but years ago a train cut through the center of the island northeast to southwest, parallel to the shore. Or southwest to northeast depending on whether one was coming home for dinner, or one was going against the current, meaning going back to the city because one had left the key to a cabinet that one had been planning to open for a very long time.

There Is a Chair but No One Sits

There is a chair but no one sits. There is a flag but there is no wind.
Stars and stripes. Sun and sand make good weather.
There is a cabana on a ship. A slip. A skirt
is what a woman holds of another and asks, “Where at?”
“How much?”        Style as a way of asking without asking
for a name: sigh:        below:        the temporary address of a blank
look                 or a quick comeback made in retrospect
or the double-take of then        now        never        or the return of the sideburn—
A stranger checked her out but already her arm was hooked under a brother’s.
A party was a crowd gathered into the smallest area possible,
where everyone looked at anywhere else except at the camera.
That collection made on the faintest trace of there, there, dear sir,
if you can walk towards the gangplank
if you can walk towards the gangplank and be still.

Farewell Goodbye but Not Really

Or a nod done out of instinct
Or a sir in the room still sleeping
with his legs open this far into the morning
when every other dear gentleman
would be walking in the light.

There was a ship and it was sailing.
There was a group of men standing in line
looking in the same direction, suggesting that a war
was happening but only somewhere far

beyond the sheen of a photograph of a sea
seen on the edge of a hat, or the prow of a boat,
which was really the sheen of me trying hard
to be a boy, arm against my hip so only
a splinter could tremble my lip.

I would like to thank the designer of my dress
for the ribbon around my chest
so in the event of any future misdemeanor,
I will have the luxury of an apology
with a flower on my heart.

Farewell, goodbye,
but not really.
Imagine that you are out on a stroll merely

as in a game of kings and queens
where you closed the flower
(Walk.)

and you opened the flower
(Walk.)
and then you turned around.

The History of Towns

Where is the belltower?
There is a tree and it still stands.

A family is only as good as the father
who is gone. A brother

with a son. A daughter who is only
as good as a vase of roses

before the city had a train
that would have allowed me

but there, there I stood.