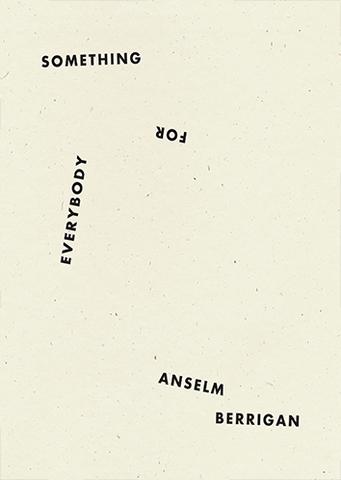 “Tilebreaker” by Polvo was my favorite song in 1992 and then again in 2010. I was once told the poem sounded at a reading like an argument, whereas I was aware of it mainly as a incision between memory-of-song and attempt-to-retain-thought in moving crowded spaces while summoning antidotes to endless war (when we shop we’re at the front). One Emerson sentence listening to De La Soul. All these boths could be wrong. It's probably the earliest and therefore oldest poem in Something for Everybody, a book built out of what got made upon request over a period of years’ ears. Imitation as solace, love, defiance, and tattered opening (write yr own blurb), plus ant wars. The list of possible (“imagined”) methods of extraterrestrial sex has to become the work. What glimpse of seven turns content when the image has to take its place in back? I have internalized 437 collage techniques at minimum in order to smush fluidity’s cheek up against the inside surface of the picture plane in motion. The requests were sometimes made by humans. Shout out to Elective Affinities, & Skasers. — Anselm Berrigan

I was busy
with frivolity
& its pursuit
of intellect
when this dig
poked head
from screen
and said, dude
bring fist down
to table & I thought
well, what does
make me happy
other than the
absolute mystery
of composition
with specific regard
to feeling thing’s
inscrutable range
of depth
immediacy
& creeping
action on the ever
unready to be
pleasant mind?
The first thirty-six
seconds of Polvo’s
Tilebreaker
for one, & as
it turns out
you can read
The New Spirit
and listen to
On The Mouth
on headphones
on the L train
beginning with
a G, & there’s
something tran-
sistent about
the two at once
the looked at
listening of sitting
and reading while
the singer sings
“clean is not a
state that’s real”
& maybe that
would be in
The New Spirit
or not, but pull-
ulating does drop
by, & the post-
punk position
as complanation
of “I’m ready to
leave again” drops
by repeatedly to
begin and begin
and begin, & it’s
less clear to me
now as to how
war and aesthetics
sit in temporal
relation to one
another as both
are and are not
ignored, and endless
war doesn’t quite
greet endless aesthetics
or perhaps they
touch like two
digitally composed
globes that animate
one globular unreal
& easily perceived
something on the
verge of something
else so one may be
the old moved mover
of yore, though
interconnection is
a military invention
isn’t it, and art is
always usually x
amount of years
behind military tech
and ditching beauty
hasn’t exactly shortened
the gap, but ditching
irritation is no help
either. I keep wanting
to dig The Hurting,
which must have
worked very hard
for me in an older
continuous present
but I only get a few
good seconds from
each tune, though
the Banshees and
Kiss Them For Me
almost shockingly
gives minutes, & 3
Ft. High &Rising
joyfully conjures
embarrassment –
I literally needed
a piece of rug to cut
slide, move the feet
without lift this
one Buffalo eve
in the deep of an
anti-gathering comp-
lex of quadrangle
living: all those
permutations
in sample form
of rock and soul
so oddly delicate
as to feel unvanished
in time without
resembling memory.
from Something for Everybody (Wave Books, 2018). Reprinted with permission of the author

When I was seven
in 1979, I’d go buy
the paper, for my
father, from Oscar’s
dark green newstand
on the corner of first
avenue & St. Mark’s
Place. Oscar always
called me Oscar when
I stopped by. “Thanks
Oscar,” he’d say as
I handed him the
quarter. “Bye Oscar,”
I’d say, turning
around, and going
back on my way.

Seventeen Mini-Essays on The Collected Writings of Joe Brainard

And then at the very moment of appreciation I had no problem.

“Our swordfish just had eleven babies and I’m not at all sure what to do with them.”

Nancy was always handing me jars that I couldn’t open.

READING
Strange to read her because I can only do so by somehow pretending to be her.

I think that a lot of people think “being a nice person” is just a cover-up. I don’t think so. Or, if it is, it’s a better cover-up than most.

I’m never totally convinced, riding a bus, that I’m on the right bus.

I hope people know I don’t want to glance away, or down, sometimes, when we are talking.

My work never turns out like I think it is going to. I start something. It turns into a big mess. And then I clear up the mess.

If you want to know what it’s like to have the rug pulled out from under you (don’t bother) (and besides, I’m sure you already know) try having a show.

This would be an interesting place to “trip”.

What defines that feeling one has when staring at a rock?

TWO HAIRS PAST A FRECKLE

I remember “Two hairs past a freckle” when someone asks you what time it is and you don’t have a watch.

That honest is only something you can try to be. (If you want to be.) And I do. But I don’t want to take credit for being honest.

It seems I am always looking for matches.

Dreams to me are a sort of bonus.

There is nothing I find more beautiful than a beautiful butt.
First appeared in Bomb Magazine (Spring, 2012). Reprinted with permission of the author

He looked about as
inconspicuous as a
tarantula on a slice
of angel food. He
stood like a statue,
and after a long
time he smiled.
He had a battered
face that looked
like it had been
hit by everything
but the bucket of
a dragline. He spoke
almost dreamily, as
if he was all by him-
self, out in the woods,
picking johnny-jump-
ups. He looked like
a man who could
take a bank single-
handed – even in
those clothes. Just
folded, like a hand-
kerchief or a hinge.
The green stone in
his stickpin was not
quite as large as an
apple. It was him all
right, taken in a strong
light, and looking as
if he had no more
eyebrows than a
French roll. His blond
hair was arranged, by
art or nature, in three
precise ledges,
which reminded me
of steps, so that I
didn’t like them.
He moved away
like a dancer, his
body almost motion-
less from the waist
up. His hair was
dark with blood,
the beautiful blonde
ledges were tangled
with blood and
some thick grayish
ooze, like primeval
slime. There was
a trickle as black
as dirty oil at the
corner of his mouth.
In his coat loose
match folders, a
gold pencil clipped
to a pocket, & two
thin cambric
handkerchiefs as
fine and white
as powdered snow.
A face with bone
under the skin,
fine drawn like
a Cremona violin.
He wore a dark
red tie with black
spots on it and
the spots kept
dancing in front
of my eyes. That
a man occasion-
ally smoked a
stick of tea, a
man who looked
as if any touch
of the exotic
would appeal to
him. He was
silent a moment,
as if deciding
something. Give
him enough time
and pay him en-
ough money and
he’ll cure anything
from a jaded hus-
band to a grasshop-
per plague. Men
would sneak in on
him too, big strong
guys that roared like
lions around their
offices and were
all cold mush under
their vests. They
probably sounded
like words. The
sound was like a
hen having hic-
cups. He was a
dark, good-looking
lad, with plenty
of shoulders and
shiny smooth
hair and the peak
on his rakish cap
made a soft sha-
dow over his eyes.
He had a cigar-
ette in the corner
of his mouth
and he held his
head tilted a little,
as if he liked to
keep the smoke
out of his nose.
It was the kind
of carelessness
that was meant
to be noticed. He
was so polite I
wanted to carry
him out of the
room to show
my appreciation.
He stood just
inside the corridor
door looking as
if he had been
cast in bronze.
He looked like
a bum. He wore
it about where
a house wears a
weather vane. He
had a big flat face
and a highbridged
fleshy nose that
looked as hard as
the prow of a cruiser.
If he had cleaned up
a little and dressed
in a white night-
gown, he would
have looked like a
very wicked Roman
senator. His skin
was as fresh as a
rose petal. His eye-
brows were coal
black, like the ceiling
and the floor. His
face was as fresh as
an angel’s wing. “He
would photograph
like Isadora Duncan.”
He was sitting with-
out a movement,
his eyes closed, his
head bent forward
a little, as if he had
been asleep for an
hour. Then he sat
like a stone lion
outside the Public
Library. He was
a windblown blossom
of some two hundred
pounds with freckled
teeth and the mellow
voice of a circus
barker. He stood in
front of me splay-
legged, holding my
open wallet in his
hand, making scrat-
ches on the leather,
with his right thumb-
nail, as if he just
liked to spoil things.
He looked like
a waiter in a
beachtown flytrap.
And I had seen
him with an Army
Colt looking like a
toy in his fist, stepping
softly through a broken
door. His smile
was as stiff as a fro-
zen fish. His long
fingers made move-
ments like dying but-
terflies. His words
were coming so fast
they were leapfrogging
themselves. He jerked
as if I had slapped
his face. His eyes were
going over my face
line by line, corpuscle
by corpuscle, like Sherlock
Holmes with his mag-
nifying glass or Thorn-
dyke with his pocket
lens. And after all
his psychic racket
is a temporary racket
for any one place.
He came back softly,
holding his pork
pie under his arm,
debonair as a French
count in a college
play. He was waiting
for something, a
sound like nothing
else on earth. He
had small, hungry,
heavy-lidded eyes,
as restless as fleas.
His face changed
so completely that
it was as if another
man sat in his chair.
His face still looked
like a stone face.
At the end he
thought and then
spoke slowly and
what he said had
wisps of fog cling-
ing to it, like the
beads on a mous-
tache. His yellow
eyes lighted as if
with a new flame.
His hat was pushed
back on his black
curly hair and his
nose sniffed, like
the nose of a hunt-
ing dog. He puffed
his cigarette awk-
wardly, as if it was
too small for his
fingers to hold
with comfort.
after Raymond Chandler
from Something for Everybody (Wave Books, 2018). Reprinted with permission of the author

Across Saturn’s rings just to check the grain of
Footing I should say pouring all the unbridled –
You been bridled lately? – love addressed to names