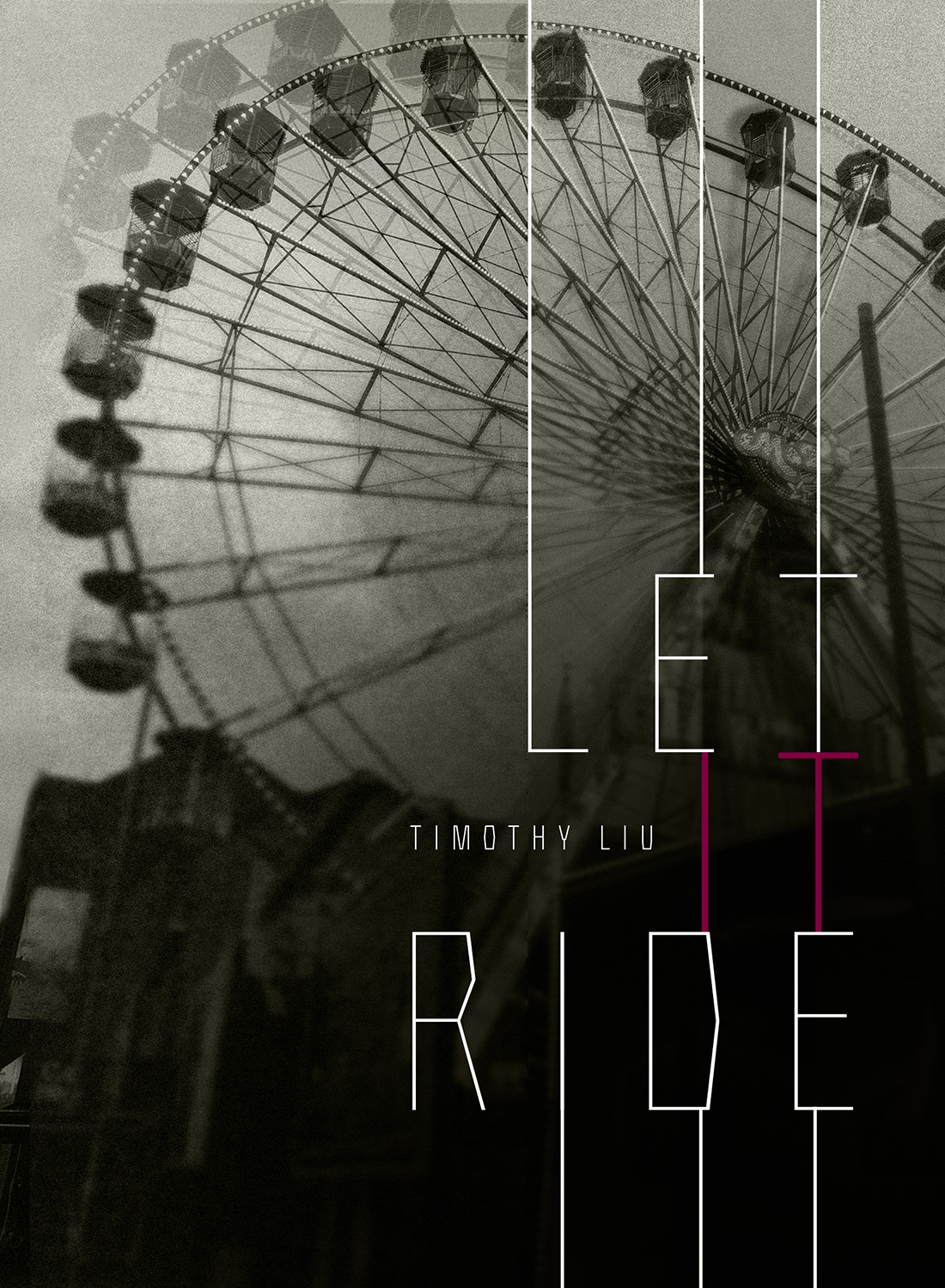 Liu's twelfth book of poems, Let It Ride, integrates life’s struggles at midlife by way of disintegration. What’s left behind are lyrical traces, poetry a gambol, love a gamble, you’re either all in or all out. You let it ride, that is, if you’ve got the guts. And ride he does. These poems argue for a life that is more than amusement—rather, a mythic venture waiting to be embodied, embarked upon. And invariably, it almost never turns out well, not in the long run. But Let It Ride show us that, sometimes, if you happen to get lucky, if you have the good fortune to jot a few things down—you just might stand a chance to walk away from the crowded table with shreds of your soul intact.

It was in between all seasons I had known.

The bottoms of my soles worn flat.

What else to conceal?

The restaurant check came back.

A dollar less each time.

He who paid me twice what anyone’s worth.

Till I was eating off of him for free.

His tongue all coin.

His mattress stuffed with specie.

Sending me downriver on his makeshift raft.

The cards left on the table edged with gilt.

I'm all in, he said, so long as you respect complicity.

Now you see it, now you don't.

As if language could be trusted one iota less.

No is sexy! blurted out at the end of every billable hour.

An exit mistaken for an entrance.

So much we did not say.

Between the gesture and the act.

Between his legs of a sudden my privacy breached.

A pint of the black stuff at McDaid’s.

A drop of Writer’s Tears.

Our wives in some back room raising the stakes.

They don't do couples counseling.
They go to Home Depot, they go to Lowe's,
figure out what it would cost
to tear their kitchen out, replace
the granite counter tops, the stainless
steel, that was so last year.
They think the market is strong.
They take out home equity loans.
They take their "date nights" seriously,
scheduling in "quality time" and faithfully
meeting their mutually agreed upon
weekly coitus quota.
They do Pilates, they do Bikram yoga.
They enroll in "positive" Tantric sex workshops
and swing with other couples
who "sing the body electric."
They post romantic kisses on Facebook,
tweet about lubricants and lingerie,
put tally marks on a white-erase board
for the number of times they've come
each week, their little wink wink
(unless friends ask, don't tell).
She knows his passwords, reads his emails,
closely watches his history cache, careful
not to delete the cookies.
Is his cock really big enough?
Can he tell she's faking it, her intensity
just a little forced, this woman
who knows how to back into a parking space
with her eyes closed, who can talk her way
out of any moving violation?
He says he's not a misogynist, gives
plenty to Planned Parenthood,
says he'd keep on doing it
even if it weren't a tax write off.
He keeps his fingernails trimmed.
He keeps an underage boy
in a soundproof room walled-off with foam.
She wears Lanvin, Louboutin.
How much longer can this go on?