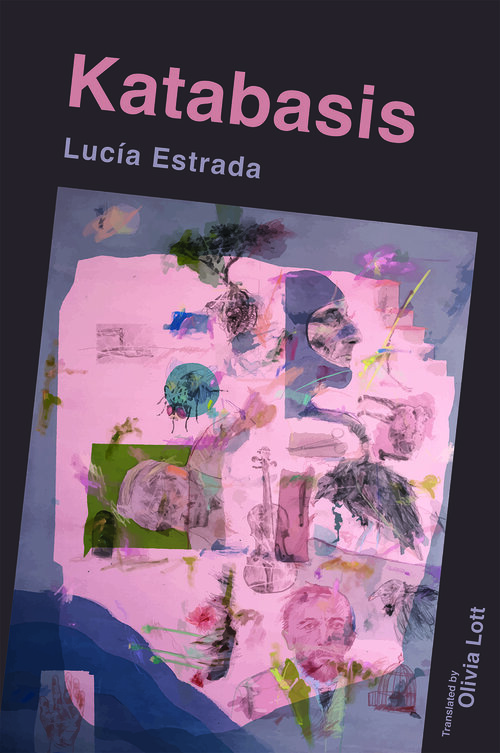 Lucía Estrada’s Katabasis is a three-part plunge into darkness, madness, the unknown. It takes its title from the Greek word, which, in the classical tradition, refers to knowledge quests into the underworld by epic heroes. Estrada’s katabatic poetics unearth a new take on descent and, with it, dissent: descent into mind-states and dream-states, descent into the intertextual and uprooted, descent into a trauma unique to a life lived in active or dormant warzone, dissent from a US imperialist vision of Colombia and its cultural production. Rendered into English by Olivia Lott, Katabasis is the first poetry collection by a Colombian woman to be translated into English and published in the United States.

Light silently wraps around stone, reaches a window. That’s where it founds its kingdom, not caring who, from some corner, was there to praise its revelation. Inside, someone tries out a formula, arithmetic she barely knows by heart, and forces her body to return this unsettling clay embrace. No part of what happens in things’ secrecy could be called on by chance. Just like that they’re taken in, offered up to the dizzy rhythm of time.

Below the roof held by no sky, life plays out in another way. An underground river with sultry shapes, a river that can barely be made out in the penumbra. What shines inside, lime, sand, soft curves that take in, like a belly, sleep, mysteries of flesh, it feeds the raging midday of balconies; sparkling sea coming and going right below, steady see-through rainfall outside. Inside, measurements will go on until the end, long delays between numbers and little clever gods.

Eyes haven’t lost sight of light’s geometric shifts for a single second, like hunter and prey, or dowser and the incessant call of water. Just like that, dimly, night, alert ear. Light is barely a ghost against jagged walls. Soon it will make off with the window, the roundness of a glass, the sharp slant of a table. The sea will stick around, its music galloping in black space. A sea dreamed up like things beginning to fade, like the lackluster shine of a compass, like hands... It’s true, in the end only hands are left, their bone-like stillness, proof there was something, not big, not little, opening itself up to night, taking place with no witnesses, taking place—simply—like light, or the stair not drawing out the staircase, dying, perfect, cold, in front of your eyes as they get switched off.

Dream tinted by madness: news of ships getting lost in the distance, salt ache speaking through women’s mouths. In someone’s hands I read her helplessness. News now splintered like their bodies before.

They reappear, eyes on us. All likelihoods of terror collected in the spasm of knowing they’re alive somewhere, breathing an ash air that carries them far away, farther than death.

Somebody screams out their names, but we’re the ones being called.

There’s a line, in all the ones you’ve set aside, where I begin to fade away. And like the wind that endlessly sways branches, I come back from the end to my birth. A single wave from your hand in the emptiness is enough to set in motion this new daze of hours, minutes, shadows eaten away... I circle myself. No limit stands in the way, but every inch of me knows winter keeps each step in view. If I light a flame, it’s so I don’t lose track of myself; if I close my eyes in the light, it’s so I exist secretly behind eyelids. Every thing that has been will come back to push its way through grass. It’s not risk-free. Here and there, every thing creaks. Heart will always be at the peak of its dying. For its dying, air, water, rust will cross to the other side... Black ink from a black sea flows from your hands to mine, squeezes the bait, spews jumbled words.

But here’s where I start to fade away. Dark line keeps to its course. Three key turns, and the body will feel its phantoms, its thick blood, the absurd shape of its interior ...

Air, blood, shapes...words tiring out their star, safeguarding circles remember in cold blood the time of sacrifices to a god as intangible as the urge to turn back.

Stone, sand, abyss. Silence that trails the crash, war cry, tempest; it mixes up with mine, white, shaky. But who says I take place in the world? Who says this day is just a day and doesn’t belong to me?

Note Found in the Margin of a Poem by Anna Akhmatova

We don’t share a name, but birds come to die at my window, too. We don’t look alike, but my gaze takes off in motionless goodbyes. If only I’d made up my mind to run after what shines just for its own bliss, instead of sitting still, if only I’d been able to skip rope, stumble to the heart of the party. My mask of bones makes the world seem so far away. How guiltless would I need to be to get it back... But here’s where I’m always looking the wrong way, dislodged ear, almost mute, eyeing the suits not cut for me, stale legacies of weariness. Dust will bring us all together—you say—still, my feet fade too soon, helpless at grasping, at tracking down a single sign. They are the fear of all places, slopes, solid ground... Listen, something in this scream is for you—you say—and don’t go looking for what you’ll only glimpse in other eyes.

Night has left the two of us completely blind.