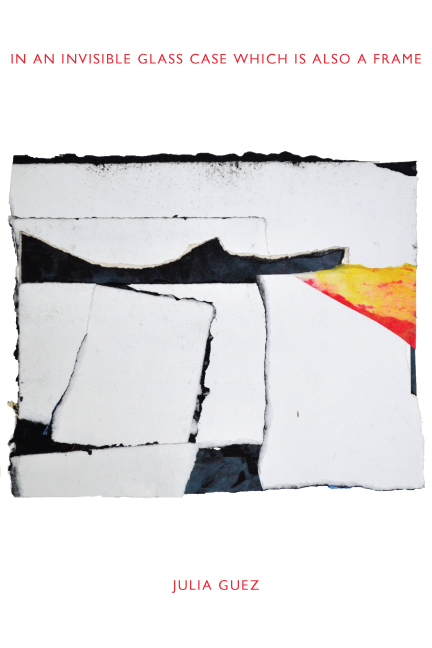 In an Invisible Glass Case Which Is Also a Frame

“A tapestry woven with myth, sorrow, wonder, and the odd pharmaceutical, In an Invisible Glass Case Which Is Also a Frame presents to us its world: a world we tilt our head to recognize, a world at once quotidian and shimmering and darkly strange. With intelligence, grace, and an understated humor, Julia Guez investigates the fabric of our being, and puts words to the uneasy peculiarity of being alive. ‘Have we made it across the vast plain of night?’ asks one poem. We have not: even the day feels night here, as the poems unfold in the dim shadow of the unquiet mind’s gloaming. But even as an animal sadness stalks us from page to page, the poems chart a course forward toward a pinpoint of warm light, and the promise of something beautiful.” —Camille Rankine

A cadence unto something almost metrical interspersed with the sound of several
rivers and at least one bridge—matchstick pylons, multi-colored flags.

A gathering music in those tea-light windows, so many mouths, the prim-
rose platform edge. And collars upturning outside, as if history isn’t

a record over and over the same and also a prophecy like any other, foretelling
the obvious danger—these shoulders, the sweep of them,

tightening against the cold before the other night begins.

First appeared in The Literary Review. Reprinted with permission of the author

Still Life in Another Neighborhood We Can't Afford

Pearl-lined with a lace stratagem
the day’s asleep in drag on the sofa.
Come upon sheets in the courtyard.
Blue first then yellow irises out front.
A park whose piers secret away a song
only fish and the drowned know to sing:
luchando, luchando, luchando.
They say no wharfage here and mean it.
Grass painted green. Living rooms full
of Lucian Freud. No sequins in the window
on the corner, only a few flags—none of them
mauve with sea-foam rings. All
the Dominicans are leaving. I repeat,
all the Dominicans are leaving.

Still Life with an Opioid Epidemic

The milktooth is no merely.
Ask the nurse.

This will be one weaning after another
and so I say

beware the naiads:
Every last one leaves

a hairpin, a parasol, a peony
orphaning each and after, all

weep over the smallest things:
the lank of them

lying in rooms whose
walls cough across

the hall from Mother who
pretends the curtains aren’t

crawling towards their own
economy.

Paint peeling yawns
through the longest

cord, a foreskin,
the sound of that

fist
beating against the bassinette

by the fern
and the fern’s condolences.

To the sensate lawns at the perimeter of a lot beyond the boatyard,

the bending in blue dresses to touch something

there and gone, the sod,

the last gingham on the line and everything after that

which New England knows well how to cast

in other colors, as if the fear she will never come back is unfounded.

First appeared in Vinyl (Fall, 2013). Reprinted with permission of the author

All that work and for what. His body began to feel

as if it were entirely liquid. His limbs felt soft and porous.
All he wanted to do was close his eyes.

One convalescence after another, a kind of willed dying.

He had felt as if he were in a glass box with fragile walls,
deep in the ocean. If he spoke or moved, he thought,

it would create a vibration, which would cause

the glass to shatter. Then, of course,
the water would pour in.

Half-way around the world,

soup, saltines, a back and forth of voices
whose unison might be deafening, if

slight almost imperceptible.
After words have failed “This is a way of saying, ‘This is unspeakable,’” but

he had just begun to whisper: