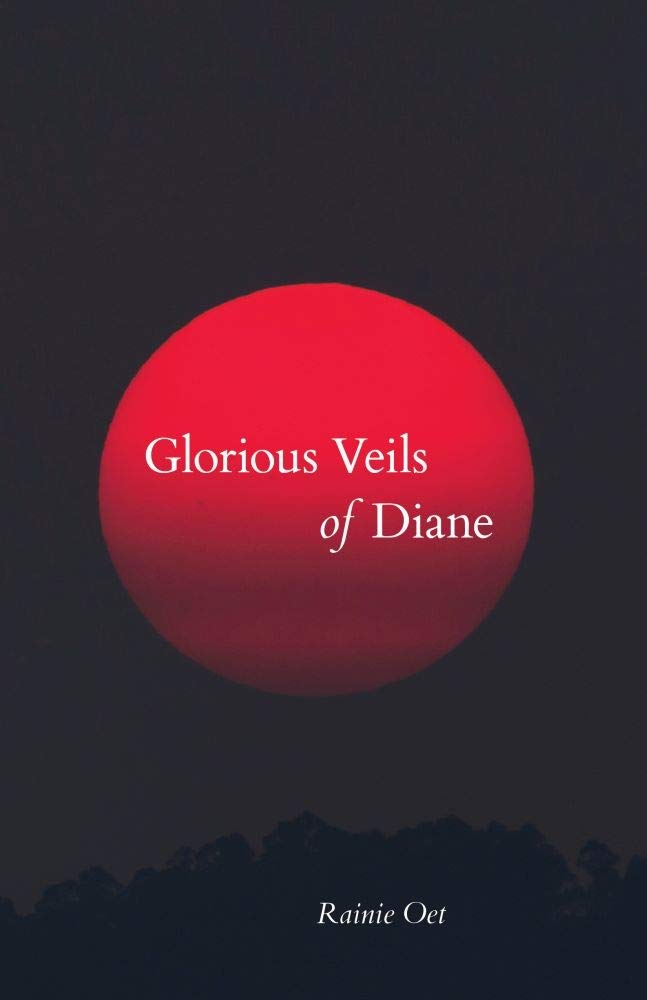 Rainie Oet’s Glorious Veils of Diane is a revelation, a reveling both unpredictable and terrifyingly familiar—in prose poems that stain the mind long after reading. For Diane, horror is a comfort, a realm of safety to a trans body made monstrous to itself. Choral and haunting, images and language fragments fold in and out of this story, and Oet unsettles with an artful grace.

Come into the dark kitchen to see Diane on a step stool cooking meat.

“Happy birthday Diane,” she whispers to me in the dark.

My daughter’s hiding in the huge closet, full of shirts hanging down. I run in to try to find her, get her on my first try. The air’s so thick with dresses, we can’t see each other’s faces. But I hug her and I run with her standing on my toes, just like old times. We’re breathing hard. I say “I’ve got you Diane.” Then I let her go.
Then it is my turn to hide as they count to ten. I’m going to play a trick on them. I’m going to disappear. I find my blind way through the clothes into a bathroom, and lock the door and breathe quietly. I wait in there for hours.
It’s getting light outside. Between me and the door is a spider web. It’s huge. I don’t know how I got through it the first time. I only see it now because of the sun glinting off marshes in the east.
Diane is a type of sadness I have only one word for. Finally, I leave the bathroom. They’ve put away all the clothes. An empty hall, and my daughter’s gone. I stand in it, calling out her name.

from Glorious Veils of Diane (Carnegie Mellon University Press, 2021). First appeared in Sycamore Review. Reprinted with permission of the author.

Blood Diary (Girl Across the Street): Moth on Fire

The moth on fire in Diane’s yard, across the street, jerking to follow the trail of its own glowing smoke, can’t realize it is the light it seeks, is on fire. The light of this fire throws wing-shadows onto the unbraiding smoke. Enormous, these shadows pound against time. I feel self-conscious, watching.

from Glorious Veils of Diane (Carnegie Mellon University Press, 2021). First appeared in Jubilat. Reprinted with permission of the author.

Diane’s Dracula cape catches fire as she dances round the bonfire holding hands with the boy she likes, and the boy tries to run and people are trying to tell her, but she doesn’t notice: she’s grabbed his arm, pulls him close to lift off his glittering venetian mask. He pushes his palm into her neck. She spins him around and he trips into the burning end of her long cape, and he used hairspray so runs into the trees with his head on fire, screaming—Diane watches him diminishing through a photo-square of her fingers. A kid throws a bucket of apple water on Diane, her grandmother’s black shirt sticks to her body, she crosses her arms over her chest. Two kids push her back and forth, ripping at her arms. Drenched, barefoot, she jumps through the side of the fire with a loud hiss, escapes through the woods.
Home, she microwaves a soaked towel, wraps her face in it, and stumbles up the stairs to draw a bath. Tracking mud—she can hear her soles’ sticking slap on the carpet and tile. She undoes her grandmother’s shirt, button by button, peels everything off except the towel on her face and sits in the tub. Shivering, she waits for it to fill. She hears her mother calling her name, as if moving from room to room before each guttural “Diane!…” Diane takes off the towel and sees she’s on her period, sees it slipping, mixing into the muddy water. She shudders (Diane!… Diane!…) and folds herself down, over her out-stretched legs, as low as she can go, so her eyes are under the water, open. She waits for the water to cover her ears. She knows how to hold her breath for a long time. It’s almost there. And, there. She can’t hear a thing but her heartbeat pounding the water, and the roar of the water itself, like the roar of the fire. Diane’s pulled up by her hair, her mother crouching at eye level, the bathroom door off its hinges, light spilling in. “Diane,” her mother says, “who are you?”

from Glorious Veils of Diane (Carnegie Mellon University Press, 2021). First appeared in Shenandoah. Reprinted with permission of the author.

Diane remembers a red dragon kite whipping over the roof, how she cut her hand holding the string still.

Diane touches her eyeball with the tip of her finger.

It’s one minute after midnight, and her birthday is over.

A crow slammed into the window. It was there and gone so fast Diane wasn’t sure if it was real.

Diane’s frog died and Diane sang “Yedid Nefesh” for it before flushing it in the toilet. As the water spun, she saw its legs kicking.

from Glorious Veils of Diane (Carnegie Mellon University Press, 2021). First appeared in Mid-American Review. Reprinted with permission of the author.

I am coming to kill what I love.

from Glorious Veils of Diane (Carnegie Mellon University Press, 2021). First appeared in Mid-American Review. Reprinted with permission of the author.