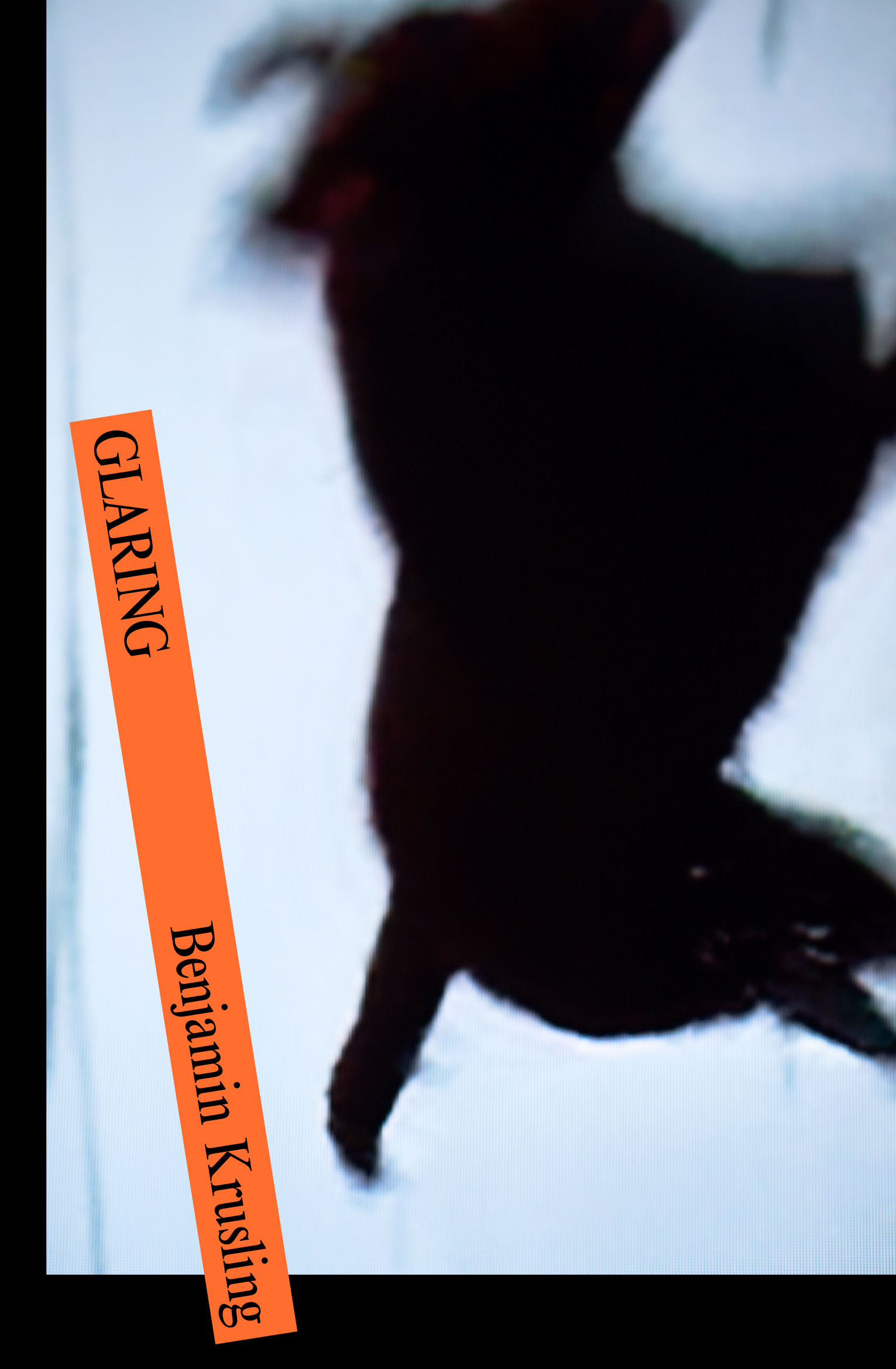 Glaring hurtles its reader deep into formal consideration’s command center, framing every punctum with queries of relation and autonomy. This text is a world where a title may hold as much as its referent, where the next work might begin inside its predecessor, where theater is stripped down to its circuitry and the charge within the performance of all language is laid bare. Benjamin Krusling’s nuanced graphical grammar is ecstatic in its quiet powers, and its scaffold of structural freedom finds tender affinity with the work’s overarching action—experimental reportage on explorations of an expansive interior landscape cracked open with softness. Throughout—heralding interiority and form—are a flickering bouquet parade of the unpaired insisting on their wholeness as is, insisting on their celebration as self. The work is ripe with fracturing’s urgency to show the ways of new wholeness, and blackness shines everywhere like slivers of light.

I CRIED THEN I WAS UNABLE TO GO FORWARD

we on our own huh even if I make it early

at the supreme north face drop for example

inside a shirt or sneaker, time circulates

and everybody else in the second gate

and beyond got a number…

you know security is out here trying new procedures every week

in an urban situation , I’m usually walking with someone and shake

about a hat or costly tonal shift

we don’t usually get that right

we’re not healthy so the situation dips to slow possession

that can be hard to think through ?

I’m usually walking or waiting with someone

increasingly conscious of the barrier

an example of no flowers or shrapnel

we’re insulting the line from beside it

they give me my stuff then they eat

soon we all eat ? just thinking that doesn’t make sense

I was going forward after all I was planning

with someone very different

to heaven , on a mule

my dream of heaven was an ice cream factory , but it

echoed blackface heaven from a few minutes earlier . & all wishes ,

brained on the marvel of televised limbo where production

that taste great on camera . ( people ! in that sense ,

of blackface ( ? heaven ?  so they try to shred the Bush

years with vocal runs . it’s a room with floor to ceiling mirrors &

people spread their arms there

childhood is sweet though it tastes like power over ,

though it tastes like pistachio . these are eyes I make the

world so careful with . long static . long talk . well , you say you

have one  . or someone will think you’re withholding .  ( in

is so sweet , they say , as they go house to house killing on a thick

excess is advancing , this inhibition could go again , my obligations shake

off the leg like a tumble of lint . I’m a stable

cultural accident , brain blockchained to the

station as I walk to the co-op and back , a unit

of shook economy , a culture , tended ,

for the driftless Midwestern thought

we owe each other a yes . we will win , for we have no other option .

we want the energy of high design to lift

debris from our hearts , to call our fathers on the

this barbarous oiling . but there’s only us

in the university office , handing intellectual property to the

so supportive , then a word from my heart

sweeps oxygen into me ,

From Glaring (Wendy's Subway, 2020). Reprinted with permission of the publisher

can I help you from a man in a suit at a building downtown . but ,

we’re under a similar heel .

I’m a vandal , the grid is on ice with my common

plantings . no machine can make me whole .

in the DC summer , I was devastated , that fire

brought lines to my face ( BD . and workers

in these liberal fits and patterns

on the same page of quote pragmatism . I’m a black American taxpayer

but when I woke from my dream

of jogger shopping , I was still in this world of enclosure , with

the coast in me , the climax . then I think : the police

are strong with this one . it’s drama . everything’s getting cloned .

and in the New York summer , I was devastated .

and in the Cincinnati summer

I was devastated . and in the Iowa summer

to leave her home . that old blue house

was barely even blue as it fell off the side of the road .

when you think of peace , you’re sick , my friend .

your face is lit

with the revolution’s problems .

of attention where racist painters craft a stupid response:

the circus is returning , with bells and bombs on ,

calling on us all to carry that cold to the subway and home .

From Glaring (Wendy's Subway, 2020). Reprinted with permission of the publisher