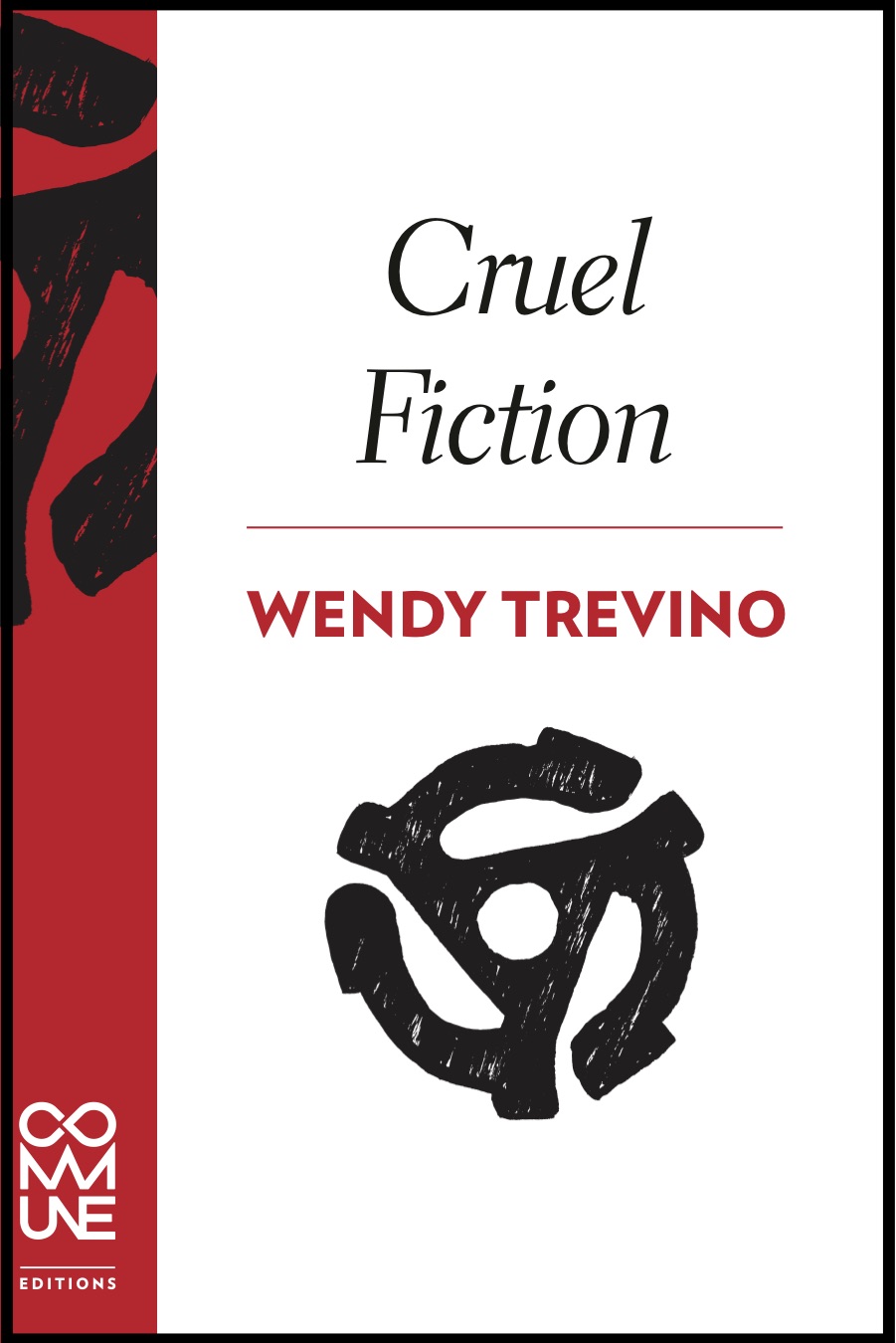 Cruel Fiction brings together new material with celebrated work, including the provocative and charged “Brazilian Is Not a Race,” a sonnet sequence meditating on race, nation, and history seen from the author’s native Rio Grande Valley. This is a spectacular debut trying to puzzle though the insurgencies, context, and kinesis of our present, from the workplace to the pop charts but most of all to the politics of struggle. “Wendy Trevino is my leader in craft. Cruel Fiction is my courage before a county judge. Born captive, I am inspired to at least take back my likeness. Against industrialists who know that in fire we are at home. One more poem could put the ghetto on the brink of irreversible rebellion. The continuum of slave fields will all know justice and Trevino has a proletariat story for every city this side of 2008.” — Tongo Eisen-Martin, California Book Award 2018

Santander Bank was smashed into!
I was getting nowhere with the novel & suddenly the
reader became the book & the book was burning
& you said it was reading
but reading hits you on the head
so it was really burning & the reader was
dead & I was happy for you & I had been
standing there awhile when I got your text
Santander Bank was smashed into!
there were barricades in London
there were riot girls drinking riot rosé
the party melted into the riot melted into the party
like fluid road blocks & gangs & temporary
autonomous zones & everyone & I
& we all stopped reading
from Brazilian Is Not a Race (Commune Editions, 2018). Reprinted with permission of the author.


It’s 11:30 in San Francisco. Britain has voted
To leave the EU. Last week, the Golden
State Warriors lost to the Cleveland Cavaliers
In the NBA Finals. We watched the game
On a flat–screen tv set up outside a bookstore
In Downtown Oakland. Right next to a vegetarian
Chinese restaurant that had been shot up
During a vigil the week before. Josh wanted
Cleveland to win. Mostly for Tamir Rice.
Mostly hoping Black people in Cleveland would
Finally get their riot. I want that, too.

This is the week after I turn 38 & 49
Gay & queer men & women—Black & nonblack
Latinx, nearly half Puerto Rican—are killed
In a mass shooting at a gay night club
In Orlando. Right down the street
From where the contestant of a popular reality
Television show had been shot & killed by her stalker
The night before. Not too far from a Disney resort
Where 5 alligators are captured & gutted
By authorities looking for the remains
Of a 2-year-old boy who is dragged

By an alligator into a lake a couple of days later.
This is the same month a gorilla born & raised
Where I was—in the Rio Grande Valley
Of South Texas—is killed at the Cleveland Zoo
After he drags a toddler who falls into his exhibit
Around. Later that week, Jane Goodall calls
The zoo to say it looked like the gorilla was
Was trying to protect the kid. I don’t know.
This is weeks before white nationalists
With the Traditionalist Worker Party stab antiracists
Who stop them from holding a rally in Sacramento.

Before a frightening number of people argue
That the rights of the white nationalists were
Violated like that’s a bad thing. This is after
A crowd of mostly teenagers—mostly nonwhite—
Chase supporters of Donald Trump’s presidential
Campaign out of San Jose. After someone takes
A picture of a white kid running frantically away
From a group of nonwhite kids running after him.
This is the same month it’s announced
Puerto Rico’s water will no longer be monitored
For quality, because having defaulted on its debt

The country can’t afford it. After the murder of 2
Activists who exposed the contamination of Flint
Michigan’s water supply. After militia men “open-carry”
As they deliver bottled water to Flint residents.
& I’m writing from the future, where all over
The United States Black people are blocking highways
& carrying guns to protests where the cops can see them.
This is the week cell phone videos of 2 Black men
Being murdered by cops go viral on consecutive days.
Before Micah X. Johnson kills 5 cops in Dallas
During a Black Lives Matter march. This is a couple

Of weeks after teachers block highways in Oaxaca
& an anarchist is arrested & run over by cops. & I keep
Thinking I will call this “11:30” because that’s the time
I started writing one night a month ago & it’s
Something I’ll come back to—more like a workday
Than a ray of light through a cloud. I guess that’s
What feels different—like highways full of people
There’s no way around & barricades & teenagers setting
Cop cars on fire. It’s inevitable. Maybe we’ll see each other.

What if popular culture is no more
Than me being interested in your
Being interested in these things that
You’re interested in my being
Interested in—except you & me
Are interchangeable & so many
& making things interesting enough
That capitalists pay each other to
Sell us back these things? What if it’s music
That’s behind the music & we are just
Walking around with that Cranberries song
Stuck in our heads? Mostly, I have questions
& don’t want to find myself. I’d rather
Look at my choices & yours. Yup. Nope. Yup.


If a woman illegally crossing
The US-Mexico border can sing
The Border Patrol agent’s favorite
Selena song, will he still detain her?
What if he does & later writes about
Her in the patrol vehicle’s back seat
Singing his favorite Selena song?
Will the Selena fans who read his book
Like it? What if that scene in Reservoir
Dogs where Mr. Blonde tortures a cop had
Been choreographed to “Bidi Bidi
Bom Bom,” instead of “Stuck in the Middle
With You?” Would the Border Patrol agent
Be more or less likely to like that scene?

After and for Jamie Berrout


The word “disposable” keeps coming up.
The “disposable female bodies” of
Women in Juarez. The “disposable
Domestics” & low-wage workers that First
World structural adjustment policies
Imposed on the Third World helped to create.
Or I’ll read a description that all but
Uses the word. The (Black) girls involved in
Sex work whose schools are “throwing them away.”
The “women (trans, disabled, Black & brown
Sex workers) [seen] as marked for destruction
...society sees...as natural, even
Necessary.” I haven’t stopped trying
With feminism—or, at least, women.

Brazilian Is Not a Race #14

Vasconcelos believed “the Indians”
Did or would eventually see themselves
As Mexican first—even after he
Laid out that hierarchy of races
He believed that. You can share a country
Like you can share a culture—with people
Who want you to disappear, who would take
Everything from you & still want you gone
Who would ask that you stand by silently
Or actively help as they make others
Disappear & all involved might enjoy
Dancing to “La Bamba” & not even
Know it was originally a song
Sung by African slaves in Veracruz.
from Brazilian Is Not a Race (Commune Editions, 2018). Reprinted with permission of the author.

Brazilian Is Not a Race #16

A border, like race, is a cruel fiction
Maintained by constant policing, violence
Always threatening a new map. It takes
Time, lots of people’s time, to organize
The world this way. & violence. It takes more
Violence. Violence no one can confuse for
Anything but violence. So much violence
Changes relationships, births a people
They can reason with. These people are not
Us. They underestimate the violence.
It’s been awhile. We are who we are
To them, even when we don’t know who we
Are to each other & culture is a
Record of us figuring that out.
from Brazilian Is Not a Race (Commune Editions, 2018). Reprinted with permission of the author.