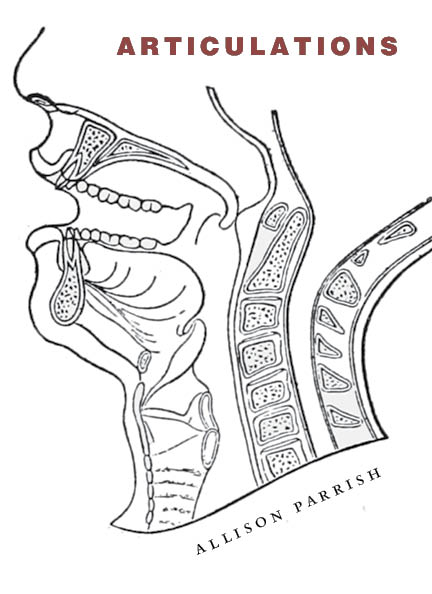 Most methods for computationally calculating similarity among texts rely on statistical models of semantics, but meaning has always seemed like a secondary feature of poetry to me. (My lowest scores on standardized tests as a kid were always in the "reading comprehension" category.) The techniques I used to write Articulations resulted from experiments in designing methods to calculate text similarity that focus instead on phonetics and syntax. The book in its final form has two sections, both computational cut-ups of lines of poetry scraped in bulk from Project Gutenberg: "Tongues," a long prose poem where lines are arranged in a way that maximizes phonetic similarity from one line to the next, and "Trees," a series of twenty-five poems composed of lines that share syntactic characteristics. Compasses, a chapbook recently published in Andreas Bülhoff's sync series, consists of poems produced with the help of a machine learning model I designed as the next step in my exploration of phonetic similarity. In addition to being able to represent the phonetics of a text and find phonetic similarities among texts, this model can generate entirely new texts based on arbitrary phonetic representations. In Compasses, I used this model to generate new imaginary words that exist in the negative phonetic spaces between the names of members of well-known quartets.


Falls like a locust-swarm on boughs whose love was like a cloak for me. Whose form is like a wedge. But I was saved like a king; was lifted like a cup, or leave a kiss but in the cup the cup she fills again up she comes again.


Till she comes back again.


Till he comes back again. Till I come back again. Like mechanical toys. Like a pale antagonist. Like a beacon, like a star, not unlike a story compiled I too reckoned, like a boy, I take the cup you kindly reach, who smoke and sip the kindly cup, and give to each its purpose, like a king to work in — things had become difficult.


Above the bosom of the wave, above the dome, above the sea, above the lake, above the trees: doubles the guilt of the crime; and the gulls above them cry, Out of the rings and the bubbles, and the rub-a-dub-a-dum rub-a-dub, rub-a-dee!

Where the tumbling surf,

Relieved he many a racking pain,

And the slipping sea,

And the wilted thyme,

But a surrounding atmosphere, whereby

And the softly tinted cheek,


And the tenderly rocking mountain

There sometimes doth a leaping fish

When first the wandering eye

Far away the bounding prey


And everywhere the trembling air

And at last the crowning deed

And far away the spreading farms

Once again the twisted branches

Than ever yet the wondering voyager


Then wherefore sully the entrusted gem

Settle once more this floating isle!

How soft the falling dew!

How beautiful the setting sun!

Where wail the lost forevermore.

first appeared in sync (Summer, 2019). Reprinted with permission of the author